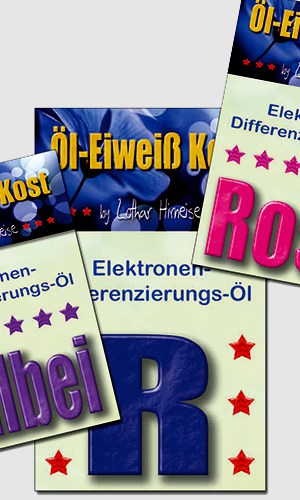 From a holistic perspective, cancer is first and foremost an energetic problem. Therefore, the intake of energy plays an absolutely superordinate role in the oil protein diet. Dr. Budwig also took these thoughts and thought about how she could achieve her energy production in addition to with food and daylight. But let us let Dr. Budwig herself speak: “In the book Light and Matter, the physicist L. DE BROGLIE focuses his research on the radiation ability of all matter. He received the Nobel Prize. The further development of these mathematical statements allowed me to gain further insights and mathematical deductions on the condensation of light to matter.
The correctness of these, my mathematical derivations, found their confirmation in the design of the real objects of invention in the form of the Eldi oils of 1968. In spite of the state of science in 1968, this allowed even the laser light to act on the living substance, light quanta in specific wavelengths could be controlled by the corresponding frequency conditions of the electron systems in the Eldi oils with the highly unsaturated fatty acids. The further development of these oils, also adapted to the recording, storage and utilization of the solar energy, was only a small step. “

What was a small step for Dr. Budwig later proved to be a great step in the therapeutic process. Dr. Budwig was able to mix oils so that these applied to the skin of a human being either fed energy, or as they proved for many breast cancer patients, to scatter the light of a laser so that it was possible to skin with a laser several minutes to irradiate without burning them. Like everything in life, simple and effective – if you know how to do it and how to apply it. In the case of laser irradiation, the knowledge was unfortunately lost forever with the death of Dr. Budwig, and no one ever followed the procedure.
Not so with the ELDI oils. I could often talk with Dr. Budwig about this. She explained to me not only the secrets of production, but especially when these are meaningful and when they are not. In general, I can say that ELDI oils are useful in 99.9% of all cases, since increased energy intake in cancer is almost always useful. There were, however, a few exceptions in which Dr. Budwig also did not use ELDI oils.
ELDI oils can be used as wraps, enemas or whole body inscriptions. According to Dr. Budwig, more than twenty ELDI oils have been developed and eight have been regularly produced for their patients. For over 4 years I have been able to study countless treatment protocols by Dr. Budwig and almost always ELDI oils were a part of the therapy. Nevertheless, an oil plays an exceptional role, the ELDI oil R. The letter R originally stood for the word REKTAL (rectal) and was thought, as the word suggests, only for enemas. Over the years, however, the ELDI oil R has developed into the therapy more developed to the oil for whole body inscriptions and away from enemas. It can, of course, still be used for enemas, but it has been used much more frequently for full body inscription.
In addition to its many positive features, ELDI R also has two challenges that I would not like to conceal. Firstly, it does not smell as well as some other good smelling body oils, and secondly, it leaves stains on clothes or on bed sheets, which are very difficult to clean.

The mode of action of ELDI oils
If you have never worked with ELDI-wraps as a patient or as a doctor, you probably cannot imagine their effects. How is such a thing to work and, above all, what effect should it have? First of all, the local increased energy consumption. Depending on how big this is, is also the effect of the coil. By the way, cancer treatment is not just about supplying the cancer cells with oxygen, but it is also about supplying energy to the transient cells in order to increase cell communication. This was also Dr. Budwig’s idea of breast irradiation with a ruby laser. It was never about destroying cancer cells with the laser, but it was about an increased communication ability of the surrounding cells. So similar to a fever reaction. Our cells are able to communicate faster and better and thus act catalytically in a way that they would never be able to do without a fever. For this reason, Dr. Budwig also irradiated the surrounding tissue with the laser and not just the tumor. ELDI oils have exactly the same goal. They simply bring ADDITIONAL energy into our body, which is readily available and can be easily absorbed by all cells.

You can buy ELDI oils at: www.sensei.de

More Information and plans how to use:

The great cookbook and textbook of the Oil-Protein Diet