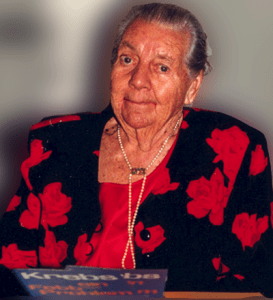 Johanna Budwig was born on September 30, 1908. Her parents were Elisabeth and Hermann Budwig. Her father worked as a mechanic and her mother was a housewife who died in 1920. After graduating, she joined the Deaconess institution of Kaiserswerth in 1926 and worked as a deaconess. The institution allowed her study and she enrolled in the fields of Botany, chemistry, physics, medicine and biology. First she obtained a doctorate in physics and chemistry and pharmacy. Then, she controlled the home pharmacy of the Deaconess Institute, which she controlled from 1939 to 1948. Then she goes to her scientific stepfather: Prof. Hans-Paul Kaufmann. There she worked in fat research and published a work on the differentiation of fat for the first time in 1950 and became head of the institute for pharmaceutical products and fats at the Federal Institute for research of fat in 1951.

Over many years, she developed the oil protein diet then alone and sets later the check to the naturopath to legally treat cancer patients. Up in the 70s she held more than 200 lectures worldwide, and retreat then more and more from the public, because the attacks against her became massive. Meanwhile pulled out of bad Zwischenahn in the Black Forest, she will focused on the treatment of cancer patients that she received in her practice in Dieter Weiler just a few kilometers away from Hotel Lauterbad in which she also applied the laser therapy for many years.

According to the publications of the two books: Death of the tumor 1 + 2 in 1977 she received fewer and fewer patients and spend a lot of energy, for their finding to be officially recognized. This was restricted unfortunately right up to her death. Early 1998 she became close friends with Hirneise Lothar. Together, they held several lectures both in 1998 and 1999 on alternative cancer therapies or the oil protein diet in particular and publish two books together. Also, Dr. Budwig began collaboration with Lothar Hirneise and received more patients and people against cancer.