In recent years I have been travelled around the world with the intention to find and research successful Cancer therapies. First, I did this for personal reasons, later as a research director of the National Foundation for Alternative Medicine in Washington, and today I make this as International President of Cancer 21 (formerly Menschen gegen Krebs e.V.). Whether in Mexico, Russia or Italy, I was very quickly clear that medicine is no science. Surely, you or your friends have experienced that you asked three physicians for their opinions and you came home with three different opinions. This has absolutely nothing to do with science and if you put the surgery or the Emergency medicine aside, this “not science” can be found in all areas of medicine.

In my travels through the oncology literature it was no better. Contradictory statements are just usual and you are at least totally confused, if you discuss with the physicians how exactly the test results of the studies in all the books can be evaluated. In the same study you can hear sentences how “this is a new breakthrough in medicine” or “this study can be ignored, look at who financed it. “ As a logical thinking man the conventional medicine, how it is practiced today, is nothing than a Pool of conflicting statements from which everyone may take what he want protected by health insurance companies, governments, and many physicians’ organizations.

At a time when I had already accepted that I will spend many years listening to diverse opinions about what cancer is, how cancer develops and above all how cancer can be treated, I started to inspect the material a little closer and to evaluate it for months. The most important thing in the first analysis of my travel time was that people who survived the so-called “final stage” of cancer had imperative commonalities. I came to a point, where I looked at Oncology, for the first time really properly – this means from the perspective of patients and not from the perspective of doctors and scientists. From this view, it was possible for me, to look at oncology from a logical perspective. Finally, I was able to pack the previously accumulated knowledge into a comprehensive system and I was able to classify the theories about the origin and treatment of cancer. All of the various conventional and non-conventional therapies confused me no more, but helped me to find the truth.

Two results were evident. First I found out that cancer patients in a final stage could be treated much more successful if they were not treated with massive conventional therapies. Unfortunately, however such people in western countries are very rare, as the medicine and unfortunately the legislation almost allow or pay for conventional therapies. The second point that I discovered was that those seriously suffering from cancer were never healed by certain drugs, but always through the sole mental or spiritual work and / or by a combination therapy of detoxification and nutritional measures.
And there was something striking in my evaluations. None of the patients had applied therapies with serious adverse reactions (although this of course often occurs during the first treatment (s)). The old law: Primum non nocere (First, do not hurt), unfortunately forgotten in the medicine of the 19th and 20th Century, brought the people direct and straightforward to the Path of health, than today’s modern medicine.
Now you might think, well, that’s nothing new. But why are drawn no consequences? Why has nobody yet begun to pack this knowledge into a system for everyone? Why does everyone think to be able to sell his “piece” in the big picture of oncology? Very quickly, I found the answer to all these questions. I was simply not caught in one of the systems where all the people usually stuck who have this knowledge, at least partially. I was not forced to make my living with the “sale” of therapies or drugs. I was not forced, for political or financial reasons to support my career. Never before I had something publicly claimed something that I had to withdraw later or which led to loosing my face.

At first glance it might appear not to be significant. But if you look something closer, who is claiming what and why, than you will very quickly find out that one of these points will always play an important role. So I am what you can call “independent”. Obviously my psychoanalytic training and my mathematical – logical thinking helped me to integrate my knowledge later in the 3E-program. But if I am passing in review the last few years, it was mainly my (financial and intellectual) independence, enabling me to bring my oncological experience into a system. After all these “revelations” I started to look at Oncology from “my scientific point of view” and to look am my knowledge and future experience always and only from my critical perspective.

To look at therapies from the perspective of empiricism (the teaching experience) does not mean to leave the scientific way quite the contrary.

After evaluating all my data available and after countless interviews with patients and therapists in many countries, began to ask patients who survived a final stage of cancer some other questions. And lo and behold, the first time all the answers made sense and could be explained in “my” diagram. There were no immediately inexplicable “spontaneous remissions” or “miracle cures”, but only people who are usually guided by a feeling (this is sometimes called unconsciously) rather than by their intellect and thereby found the right path to a new health. If we want to understand why people are getting healthy, we must first think about energy. Have you ever thought about the difference between a person dead and the same person one thousandth second before, when the person was alive? Under the microscope or during a CT, everything would look the same, even the blood would be the same and yet the difference could not be bigger.

Some would call it a man with or without a soul. I call it an energy difference. To help you better understand what I mean when I speak of energy first I would like to define this word better. Energy for me is an invisible life force that is neither created nor destroyed it only can flow or does not flow.
So we can create conditions in which this energy can flow, such as creating a new life or we can destroy structures, and disrupt this energy (which we usually call disease), or completely discharges (Death). In between there are millions of intermediate steps (illness, love, faith, Sympathy …) that determine every day life.

In my research came out clearly that the flow of energies decides whether a patient is dying or not. Now there are many ways in which this energy can be improved and therefore also in the unconventional Oncology there are many different treatment approaches. But regardless whether a patient makes system leaps now, visualizes the future, prays, meditates, changes his expectations or makes a tumour treaty, in the end all these important things improve the energy flow and are the name of the game of a holistic therapeutic approach.

In addition to the energetic work it was mainly detoxification therapy (intestines, teeth, Acid-base budget …) and nutritional therapy (oil-protein diet, Gerson, salads, Macrobiotics …) the people applied on their way to healing. Because all 3 important parts (energy / detoxification / diet) in German are starting with the letter E, I called the program, as I now teach and represent the 3E-program.

See also the 3E-study about the success of the 3E-Program. 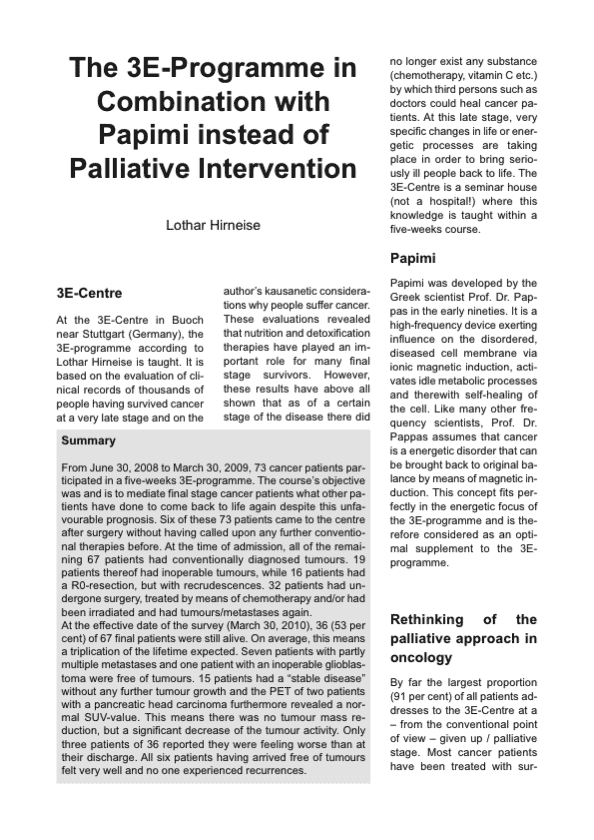