The IOPDF assigns a star for each fulfilled criterion. The best oil has thus 6 stars and the worst gets no star. Let us look at the 6 criteria in detail:

Criterion 1: Cooling chain
Studies have shown that, in addition to processing the linseed, cooling is the most important criterion for a good linseed oil. So buy only linseed oil stored in a refrigerated rack and kept in a permanent cold chain. If you shop through the Internet, the linseed oil must be delivered in a Styrofoam packaging.

Criterion 2: Local linseed
Weekly shipping on ships and sometimes additional chemicals used can cause great damage to linseed. Therefore, make sure that you only buy linseed oil whose linseed comes nor from another continent.

Criterion 4: Organic quality
It makes a big difference whether linseed grows in biologically controlled soil or in soils of conventional agriculture. So buy only linseed oils with organic quality, unless you know the oil mill personally and know what linseed the mill is processing.

Criterion 6: Light
Flaxseed oil should be packaged and stored in a light-proof package. Therefore, only buy bottles in dark brown or dark green bottles.

And what linseed oil should I buy now?
Flaxseed does not taste well to many people, since oils from sunflowers or olives tasted simply much better. Almost all the people I know buy linseed oil because they know that it is simply healthy for them. But what is the use of a linseed oil that has hardly any electron clouds? Therefore, when buying, be very careful about who you buy your linseed oil from, especially if you use linseed oil as part of a therapy.

Most people buy their linseed oil in the shop or send it home. If you are also a member of this group, please note the following:

1. Linseed oil in the 1 and 2 star quality should be basically avoided.

2. Buy a linseed oil containing if possible appr. 60% linolenic acid. Because this is what you need for the oil protein diet. Moreover, it shows that the manufacturer is careful in pressing the seed or if a good seed has been bought at all.

3. Do not buy a linseed oil whose linseed is from another continent. I do not claim, of course, that all oils from China are fundamentally bad, but the seed has logically gone a long way, which is energetically very negative and the controls, especially in Asia, are easier to handle than in Europe or America.

4. Linseed oils with 3 and 4 stars are partly very cheap. If you can’t buy 5 or 6 star linseed oil for financial or logistical reasons, first make sure that it is in the refrigerator compartment and is not coming from another continent.

6. Buy as small quantities as possible and use them within 2 weeks after opening the bottle.

7. 4 stars do not have to be basically better than 3 stars, because what benefits a bio-flaxseed, if this is not correctly processed. In addition, many assume that NON-BIO is generally worse than organic. But this is not the case at all. I personally know oil mills that produce very good linseed oil in organic quality, but are not willing to spend so much money on an organic logo. And on the other hand, I know oil mills that have the bio logo on their linseed bottles, but do not process the linseed properly.

8. If you let flaxseed oil be sent home, it should always be packed in Styrofoam.

9. If you are sick, buy only 5 or 6 star linseed oil. These are also not or only slightly more expensive than 3 or 4 star oils, but have the great advantage of permanent cooling chain.

10. Look forward to when the linseed you bought over time becomes bitter. This is a good sign and shows that it still was reactive when you bought it.

So be sure to look carefully at the manufacturer of linseed oil. Ask him where he refers to his flaxseed, whether they are for example, organic goods and how he sends the goods to you or to the store. With flaxseed oil it is similar to cosmetic products. You do not change your manufacturer every month and it is worthwhile to invest a little more time to find out if you buy, what you buy as well as your own requirements. And many people even care about their health.

Should I buy linseed oil mixed with other oils?
Oils often are mixed with other oils such as sunflower oil, borage oil, argan oil, etc. The whole is then also sold as an omega-3 oil, because it has been shown in the past few years as a sales promotion by the term: Omega-3. Apart from the fact that with the term omega-3 much nonsense is spread, these mixtures all have a big disadvantage: they have LESS omega-3 fatty acids as linseed oil. Since linseed oil has the highest omega-3 content of all oils, this is logically lower when combined with another oil.
For example, some companies mix linseed oil with sunflower oil and sell it as an omega-3 oil. But do not forget: Good linseed oil has about 60% omega-3 fatty acids and sunflower oil just 1%. In a similar way, this results in only 30% omega-3 fatty acids instead of 60% as in linseed oil. The reason for such a mixture is certainly not to be found in the fact that one wants to sell the consumer an oil with a lot of omega-3, but rather is that it can be marketed better and because sunflower oil is of course much cheaper than flaxseed oil. So if you want to buy an oil with a lot of omega-3 fatty acids, there is only one thing: flaxseed oil. 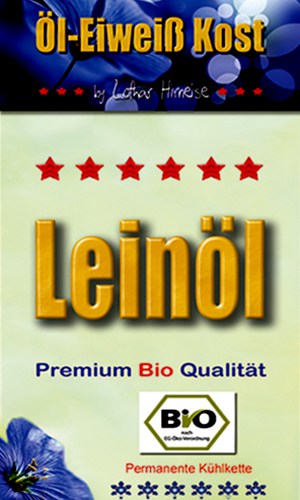